On Going to Brighton by Pullman

For this week’s installment, we hit the rails with Arthur Machen in another delightfully discursive travelogue. Because of size and culture, most Americans are not aware of the joys of journeying by track. Yet, such descriptions make one desire to hop a Pullman and travel to a seaside town. Though this trip occurred over a century ago, it seems fresh and inviting to those who suffer from that unique type of nostalgia which produces comfort in imagining a time or place we have not experienced.

On Going to Brighton by Pullman
by
Arthur Machen
September 13, 1915 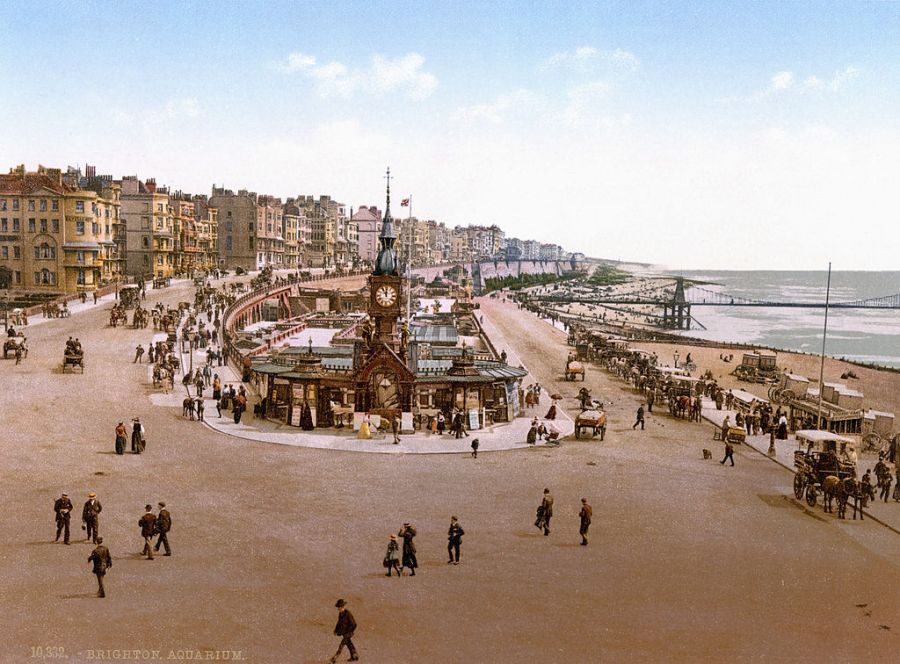 This was an innovation which eventually will probably have a far-reaching effect on third-class railway travelling.

The idea will most likely be followed in other directions, and the third-class passenger be enabled to have the various conveniences, such as sleeping compartments, brought within his reach.

Yesterday I went down to Brighton. The feat is not an absolute novelty, either for me or for the rest of the world, but this visit was performed under new circumstances. It was the first running day of the third-class Pullman cars, supplement ninepence.

I have been to Brighton in a First Class Pullman. I don’t recollect much about it, I have a confused impression that I dwelt in inlaid halls with vassals and serfs by my side, who were ready to fetch me liquid refreshment at enormous prices. One item on the card quite overawed me: mere gin (not called “the best”) was ninepence. “This,” I said to myself, “is what it is to be really wealthy. You drink gin at ninepence a time all the way to Brighton, and think nothing of it.” It is a solemn thought.

Well, there are certain likenesses between the old First Pullmans and the new Third Pullmans. The new kind is of inlaid woods, though the inlay is not so elaborate. To leave gin—a vulgar drink, I fear, though Lamb had a liking for it—three-and-sixpence for a bottle of Graves struck me as overmuch. But, on the other hand, sixpence for a pot of tea and bread and butter is gentle dealing, as though Pullman loved you. And the tea and bread and butter are quite nice; I had some on my way home in the evening. 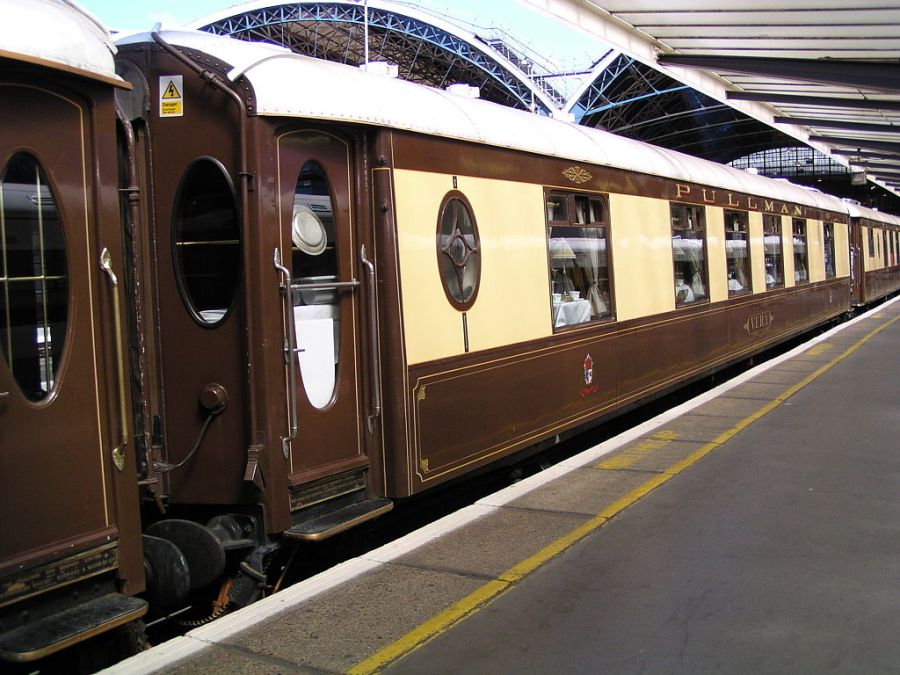 The platform at Victoria was in a state of excitement on Sunday morning. I don’t know what people thought the London and Brighton and South Coast Railway company was going to do for them; something of a wild and Oriental and Arabian Nightish character, I suppose. Anyhow, before the train had finished sliding into its place all the aisles of the new cars were blocked up with people going in opposite directions, and three stout ladies were cross. I should think every seat had been booked in advance, as it had been a first night at the Lyceum in Irving’s day; at all events every seat was occupied in a minute or two. Then we all turned cross, because it was very hot, and we couldn’t understand the device for opening the windows. The Pullmen soon made this clear, and we went off punctually, and soon we were going through the serried London suburbs at a great rate, getting cooler and better-tempered every minute. We were ready now to admire the ingenious, glass-topped, green baize covered little tables between every couple of seats, and it was generally allowed that the cars were very pretty, as indeed they are.

We passed then through the multitudinous suburbs which affected me to solemnity, as they always do, since they remind me of the starry systems of the skies, endless in their order. We passed by open places, the grass and trees of which are now beginning to look a little wan with the heat and the coming of autumn. Now and again one was sure that London had ended, that the real country had begun; and lo! a fresh city of the suburbs, leafier, with ampler gardens, but still an evident part of the great London cosmos. And one of the last of these outposts was really impressive and almost beautiful. I could not read its name, we were going too swiftly through the stations for that, but it is planted on the summit and on the sides of a chalky hill. And the sun was radiant. I have seldom seen so luminous and splendid a day, and this sunlight shining on the bright red tile roofs, and the bright white plaster of the walls, and the bright green of the trees made a delightful scene. The suburb looked illuminated. At least that is how I put it to myself. A man on the other side of the car said affectionately to his friend “some nice property there”; and I dare say we meant much the same thing.

And, so at last into the open country, and as the train souths swiftly, a very noble country it is. Not so much that part of it near the line, but rather in its prospects of high, deeply wooded regions far away. One conjectures that “over there” there is an outland territory, a land that knows nothing of London, nothing of Brighton, nothing of railways. I think that there must be woodsmen’s huts deep in these far-off woods, and winding, wandering ways, where strangers miss the track, and find themselves involved in a labyrinth of trees. A friend of mine, I know, went wandering in this country a few weeks ago, and came to an old roadside tavern. He began to talk about the war, and the country people followed him for a little while. But then the host said what he would do to the Kaiser if that monarch came into the wild woodland, and he brought out a fine old flint and steel pistol to illustrate his speech. But that pistol had belonged to a famous smuggler of a hundred years ago or so. That ended all the war talk; the tavern discussed the smuggler and his great legend and tradition for the rest of the evening. 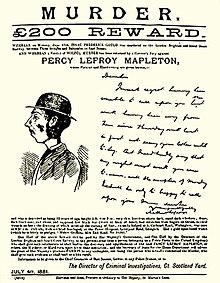 Balcombe Tunnel reminds me of Lefroy. Somewhere here, having murdered Mr. Gold, Lefroy threw his body to the line. This I have always reckoned one of the great murders, not for circumstances, but for the extraordinary character of the murderer. When he was in gaol, awaiting his trial, he asked a woman, a relation, to send him a file hidden in a meat pie. So when I first came to London I sought a Fleet-street tavern between nine and ten at night prepared for revelry. Of course, they were putting up the shutters. Whence it appears that both Lefroy and myself had battened on eighteenth century literature. Dr. Johnson is dead; and the last malefactor to file his prison bars has been hanged long ago.

Preston Park, close to Brighton, brings a mere genial memory to my mind. Mac was a Scottish “flyman,” and had got his first engagement in a London theatre. He had become popular up aloft before the last curtain fell, and there were celebrations after the play. Mac rolled off to Victoria, rolled into a train—his lodgings were at Battersea—and fell asleep. A hand on his shoulder awoke him. “Whaur’s this?” he asked. “Preston Park. Ticket, please,” said the guard. “Whaur’s Preston Parruk?” “Near Brighton.” “Whaur’s Brighton?” They gave him up after that and let him sleep all night in a coach, and returned him to London next morning—all for the original fare of a penny or penny halfpenny.

And so—not at last, but in an hour and ten minutes—into Brighton, which is all a glitter and ablaze of sunlight, and fuller of people, I think, than I have ever seen it. The horrid cold in the head which I have not hitherto mentioned felt better almost immediately. “Dr. Brighton,” of course—and his partner, Dr. Preston, whose patients affectionately call him “Harry.”

And strange to see the Indian soldiers twisting their long black hair into topknots under the sham-Orient of the Pavilion!

Previous: Books of the Week

Next: Hickey: The Romance of an Old Manuscript

2 thoughts on “On Going to Brighton by Pullman”