Some Thoughts on Robert Louis Stevenson

The following article is taken from Odd Volumes, Machen’s irregular series of book reviews for the Evening News. Below, are several sections dedicated to books which have nearly all fallen into obscurity with their authors. Yet, the opener gives us an opportunity to read brief opinions by our correspondent on Robert Louis Stevenson. This is interesting because RLS was clearly an influence on Machen’s early fiction. For example, Machen’s The Lost Club (1890) shares striking characteristics with Stevenson’s The Suicide Club (1878). The same can be said of Machen’s The Three Impostors (1895), yet it would be easy to overstate this influence. While both of the cited works by Machen bear resemblances to RLS, at their core, each are purely the creation of their author. Like The Suicide Club, The Three Impostors employs an episodic structure to chart the adventures of the book’s main characters, yet it is impossible to imagine Stevenson creating that weird saga! Afterward, Machen would shed any imitation and forge a bold new course in his writing.

Odd Volumes:
Some Thoughts on Robert Louis Stevenson
by
Arthur Machen
May 20, 1911 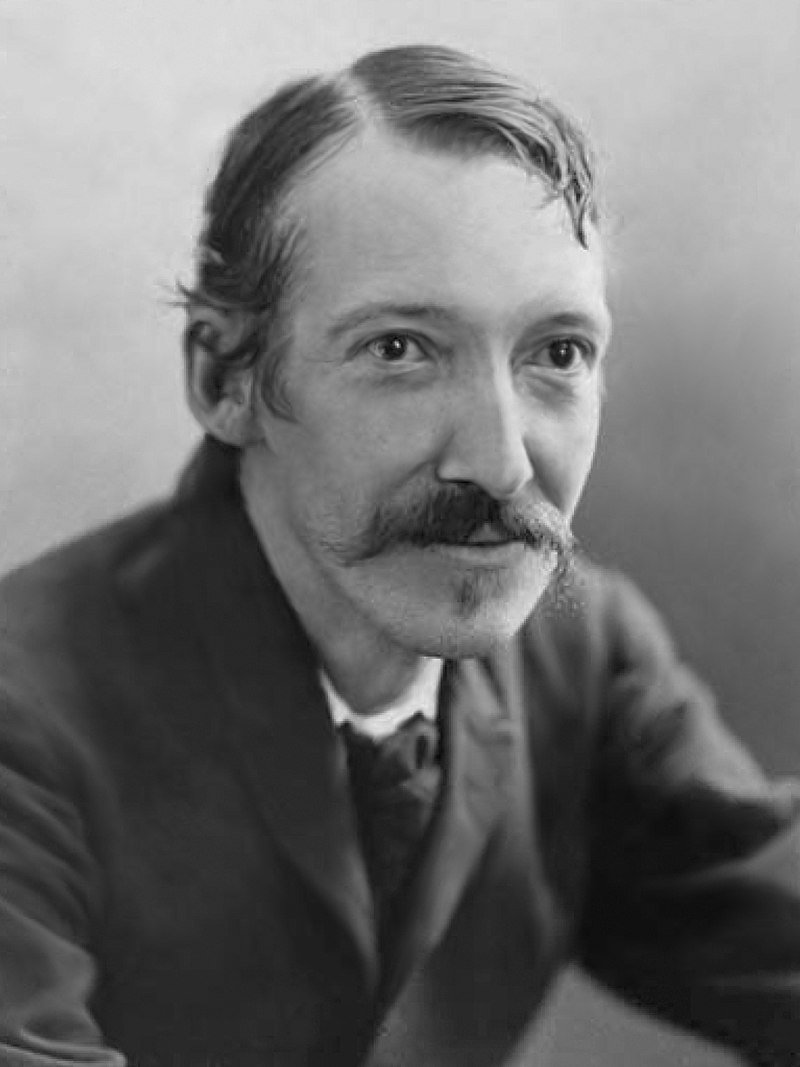 In little more than a year’s time it will be possible for lovers of Robert Louis Stevenson to possess the complete works of their favourite in twenty-five neat volumes for the moderate price of £7 10s.

The new edition, which is called the “Swanston Stevenson,” is to be issued by Messrs. Chatto and Windus. The type is clear and pleasant and the size (crown 8vo) quite the handiest that could have been chosen. Big books and little books are alike unfit for common uses and everyday reading, though each has its place and pride: the one in grave and learned shelves, the other on a lady’s pretty drawing-room table, beside her snuffboxes and miniatures.

It will be interesting to read Mr. Andrew Lang’s elaborate preface to the Swanston Stevenson, for it is sure to be full of good things. {Read Lang’s RLS Intro – ed.}

Personally, I have always been of the opinion that the best criticism of R. L. S. was penned in the leading columns of the Pall Mall Gazette on the day on which Stevenson’s death was announced. The leading article spoke of the dead author as among the greatest of “The Little Masters”; and as I say, it seems to me that no juster verdict could possibly be given.

And if the Stevenson enthusiasts call this a damning with faint praise, let them remember that it places their hero in the rank of Herrick; that it awards him the merit of a charm which is not short of exquisite.

Stevenson handled his materials beautifully and perfectly; but his figures are figurines, not godlike statues of the heroic mould.

It would be difficult to distinguish exactly in precise words between little and great master, minor poet and major; but perhaps the difference is this, that the great artists’ emotions are felt with the utmost degree of intensity possible. Major and minor tend the same flame; but Herrick’s fire is a ruddy glow, while Milton’s aspires in pure white heat.

There is something odd and a little startling in being confronted by a language which has absolutely no relationship to one’s own tongue.

For if one thinks of it, one can go a long way linguistically and yet see here and there a friendly and familiar face – that is, word. There is a gulf between Wales and Spain, but as a travelled Welshman once observed to me, the Spanish call a horse “caballo,” which is like the Welsh word for the animal, “ceffyl.”

So an Englishman can find familiar sounds in such outlandish tongues as Greek and Sanscrit; there are old root-words common to all.

These strange words, we are informed in “Letters from Finland,” by Rosalind Travers (Kegan Pail), are the first ten numerals in Finnish, and the look of them is enough to tell us that the Finnish language is altogether outside the great Aryan pale.

How to Begin a Story

There are some very noteworthy things in one of Edgar Allan Poe’s essays on the art of beginning a story. The first words, according to Poe, should be vital, suggestive, giving the keynote of what is to come, ringing up the reader’s attention.

How far do the novelists of to-day follow Poe’s precept?* Here are a few examples of first sentences taken from current novels:­–

“The School of Love,” by Priscilla Craven (Laurie):

It was a tearful April day.

“The Ascent of the Bostocks,” by Harold Storey (Paul):

Mrs. Rawson’s verandah was a pleasant extension of the drawing-room, and overlooked a pretty garden of flower-beds, gravelled paths, and miniature lawns.”

Between sleeping and waking, Persephone Bellairs heard her death warrant.

With a Motor in Italy

When you have read “Through the Alps to the Apennines” (Kegan, Paul, Trench, Trübner and Co.), you must have come to the conclusion that the only way to know a country is to motor through it.

Certainly the Italy of the author, Mr. P. G. Konody, is a very different Italy from that of the ordinary tourist, dependent on the railway. Mr. Konody and his friends – one would like to know “Pomponius” – explored villages where a motor-car had never been seen, and they met the real Italian peasant, unspoiled by contact with the guide-book visitor, who must get the impression that, after all, Italy is only an enlarged Saffron Hill.

Mr. Konody is a critic of great distinction, and his book is largely concerned, naturally, with the art treasures of the country; but merely as a record of amusing – and sometimes disturbing – adventure it would be well worth reading.

The work is lavishly presented, and has nearly a hundred illustrations, the photographs being particularly good.

How does Arthur Machen stand up to Poe’s precept?

From The Three Impostors:
“And Mr. Joseph Walters is going to stay the night?” said the smooth clean-shaven man to his companion, an individual not of the most charming appearance, who had chosen to make his ginger-colored mustache merge into a pair of short chin-whiskers.

From Hill of Dreams:
There was a glow in the sky as if great furnace doors were opened.

From The Terror:
After two years we are turning once more to the morning’s news with a sense of appetite and glad expectation.

From The Secret Glory:
A heavy cloud passed swiftly away before the wind that came with the night, and far in a clear sky the evening star shone with pure brightness, a gleaming world set high above the dark earth and the black shadows in the lane.

From The Green Round:
It was at the end of a dreary spring day when Mr. Lawrence Hillyer came to the uneasy conclusion that something was amiss, and that it was time to pull himself together.

Previous: The Book of Common Joys

Next: The War Behind the War

11 thoughts on “Some Thoughts on Robert Louis Stevenson”