The East in the West

During his tenure as journalist for the Evening News, Machen penned a series entitled “Wonderful London,” which focused on the fascinating breadth of experience offered by The Great City. For the fifth installment, our correspondent presented the reading with his experience of attending a Divine Liturgy at a Greek Orthodox Church. In the piece, Machen displays both a knowledge of the service as well as an appreciation for the mysticism of the Eastern Church. This article appeared in the Darkly Bright Press collection Dreamt in Fire: The Dreadful Ecstasy of Arthur Machen.

Wonderful London V:
The East in the West: The Greek Church in Bayswater
by
Arthur Machen
January 23, 1912 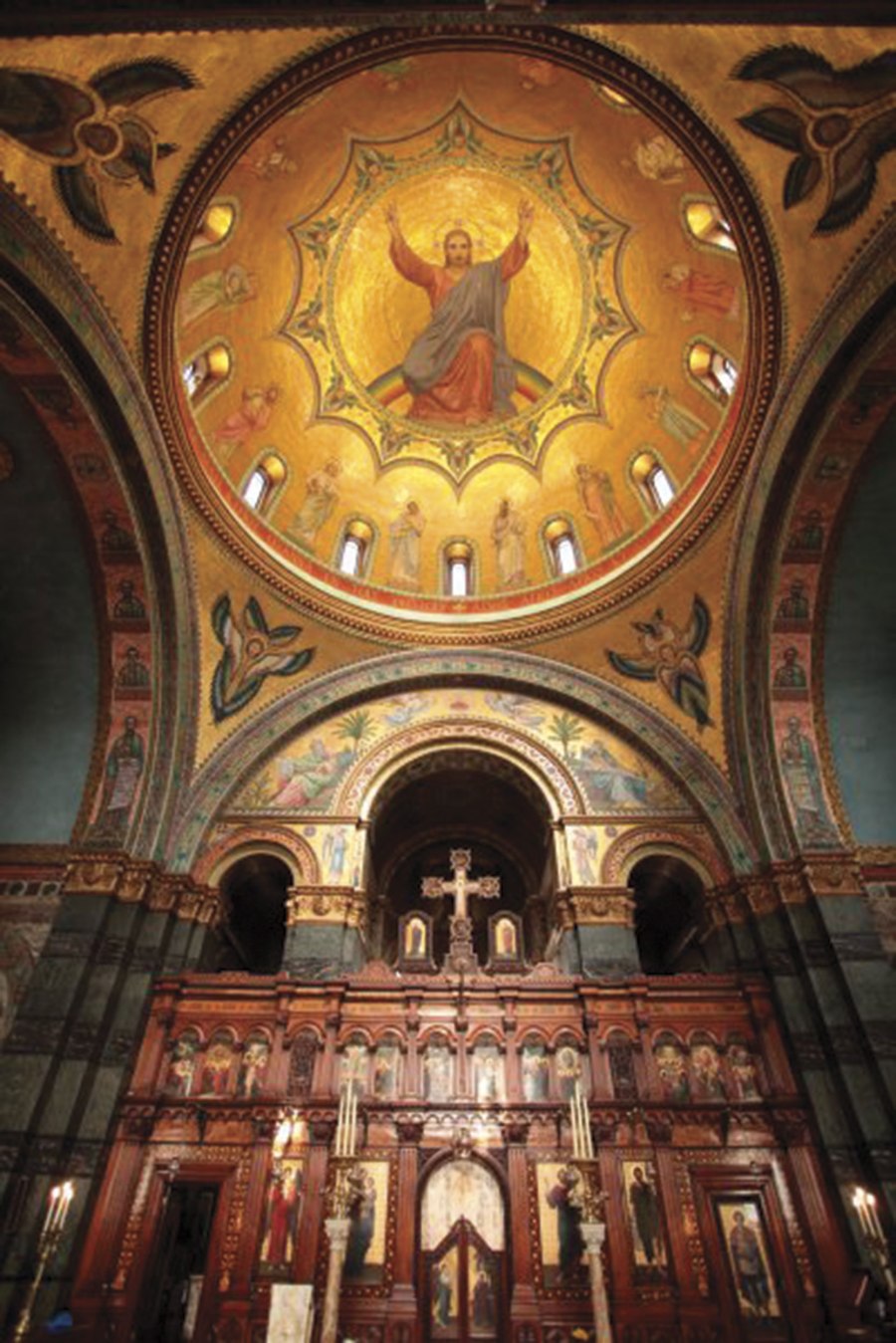 In the English Service Book there is a prayer which falls familiarly enough on many English ears. It begins: “Almighty God, Who hast given us grace at this time with one accord to make our common supplications unto Thee”: it is said at Matins, at Evensong and in the Litany. It has become a native and homely and friendly in its accents as all the other Prayer Book utterances; and it comes from a far way, from old Byzantium.

The compilers of the Prayer Book style it “A Prayer of St. Chrysostom,” and the other Sunday I heard it chanted in nasal, ringing Greek at the Church of Hagia Sophia (Holy Wisdom) in Bayswater. It is the prayer of the Third Antiphon in the Divine liturgy of St. John Chrysostom, the Rite which is used, save during special seasons, throughout the Orthodox Eastern Church.

Hagia Sophia is a domed, red-brick building without; within it is a place of mysteries and dim splendours. It was a dark and misty morning, and my first impression as I entered was a glaring of gold mingled with rich colours, a wall of gold parting the church into two portions, and a long-haired, long-bearded priest clad in a golden vestment standing before a lighted altar, just within the central doors of the dividing wall.

Above, in the hollow of the dome, a great Christ in mosaic extended His arms in blessing over the church, and at His feet were the Apostles. And around the ring of the dome is an inscription beginning “Hagios, hagios, hagios, Kyrios Sabaoth,” familiar to us as “Holy, holy, holy, Lord God of Hosts.” The choir in their gallery in the northern transept were singing an anthem and making a melodious pattern of music in the air; there was a sweet, faint smell of incense.

The Mystery of the East

A Greek ecclesiastic, arguing with an English clergyman of my acquaintance, once said to him: “You speak in your Anglican Service Book of ‘holy mysteries’; but I have looked at your church and there is no iconostasis and no veil: where then is the mystery, since all can see what is performed?”

The Greek put the view of his Church in a nutshell, and he spoke not only for Greeks and Russians-for what is known as the Orthodox Eastern Church-but also for the Copts of Egypt, for the Abyssinians, the Armenians, the Syrian Christians, the Nestorians of Persia, and the Christians of St. Thomas in Malabar. In a word, he expressed the standpoint of the East as opposed to the West; and he explained the use of that dividing wall of gold before the altar.

The nave where the congregation sit represents earth; the inner holy place, where the altars stands, is heaven. And the iconostasis (image or picture-stand) between the two signifies to us that beyond all visible, tangible, material life there is a great and holy and divine mystery which we see in part, and glimpse dimly, and conjecture by half-signs and by words half-uttered. But as we gaze and would know more clearly the doors are shut by invisible hands, and a golden veil is drawn across the opening, and the last secrets are hidden from the eyes of the flesh.

The lover cannot analyse his rapture, the musician cannot express in mortal speech the wonder of immortal music; the highest poetry, the finest painting, the marvel of Gothic architecture, the delight of cold water to a parched and burning month; all these essential things of life defy in the end all analysis. As with the mysteries of earth, so with the mysteries of heaven. A “rational theology” is a contradiction in terms; and so in the Moscow-road church and all over the East, there is a wall set between the altar and the people.

The Story of the Rood Screen

This iconostasis was, no doubt, the origin of the chancel screens of the West. In some very early churches of Pembrokeshire is practically exists still: a solid wall pierced by one low and narrow doorway. But in the West the idea of concealing the mysteries gradually died out, so that in the Roman Catholic and Anglican Churches of today the altar is usually and intentionally the most boldly visible and conspicuous object in the whole building.

In the middle ages the process was a slow one; the dividing wall was pierced with many apertures, and so were obtained the beautiful rood-screens of the fourteenth and fifteenth centuries. Such a screen veiled the altar to a certain extent, but its true purpose was lost; it became a decorative feature and so disappeared.

The East is more tenacious, and the iconostasis with its three doors still remains. Its panels of rich gold are adorned with glowing saints and angels-the Greek Church does not allow of any sculptured or carven images- above it is the rood or cross, with St. Mary and St. John on either side, and on the beam under the cross runs the golden legend, “O, Christ, creative and sustaining Power and Wisdom of all tho things of God: save Thy Holy Church.” 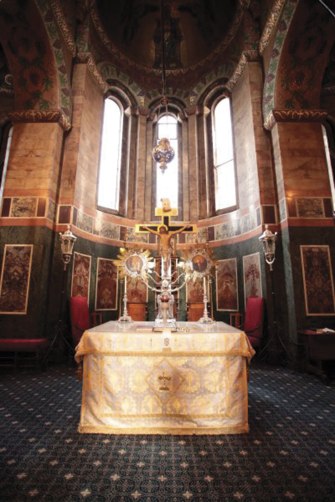 On the altar within the Holy Doors stood a painted crucifix with nine candles burning about it, and standing before it the priest- whose long grey hair and beard gave him the appearance of a venerable Arab sheikh-was chanting the opening Litany.

“For the peace that is from above, and for the salvation of our souls, let us make our supplications to the Lord.”

And then the choir answer, “Kyrie Eleison.” Then follow the Three Antiphons with their prayers; and the silver-covered Book of the Gospels is brought into the sanctuary; two acolytes in long white albs girt with blue fillets and a cross-bearer in like habit going before it, and standing before the central doors. And the choir sings the hymn called Trisagion, or Thrice Holy.

“Holy God, Holy and Mighty, Holy and Immortal, have mercy upon us.”

The rite I witnessed was somewhat maimed, since the priest was not assisted by a deacon, who in the eastern rituals takes a very large part in the service; now engaged in fervent dialogue with the priest, now addressing the people, now commenting in the manner of the Greek chorus on the high and awful significance of those things which are being performed in secret within the Veil. Thus in the Liturgy of the Indian Christians of Malabar the deacon utters the voice of warning:

“From everlasting to everlasting; the Altar is fire in fire; fire surrounds it, let priests beware of the terrible and tremendous fire, lest they fall into it, and be burnt forever.”

But, as I have said, there was no deacon at the church in Moscow-road, and the service was sung by priest and choir alone.

But ever and again the white robed order of the cross-bearer and the torchbearers came out from one of the doors, stood awhile before the centre of the screen, and entered the sanctuary.

The Epistle and the Gospel were read, and then follows a rite which comes down from the earliest days of Christianity, which has been nothing but as form for twelve hundred years or more. This rite is the expulsion of the Catechumens, that is of persons under instruction, but as yet unbaptised. These people, with pagans and lunatics, were debarred from being present while the most sacred portion of the Liturgy was being performed; and so the deacon makes the proclamation:

Sometimes, he cried, “Look upon one another,” and “The doors! the doors!” in Masonic phrase, the Lodge was styled; the initiated, and only the initiated, were to be present.

This done, the great drama of the Liturgy moves solemnly and splendidly onward to its tremendous consummation. I saw the golden priest going about the shinning altar, encompassing it on every side with faint blue smoke from the waving silver censer. He bore in from the door in the north the veiled Elements, the torchbearers and the cross going before him to the gate; and the people bowed their heads and made on their breasts the signs of the cross in the Eastern fashion-from right to left instead of the Western left to right. And as this was done the choir sang:-

“Let us who mystically represent the Cherubim, and sing the holy hymn to the quickening Trinity lay by at this time all worldly cares; that we may receive the King of Glory, invisibly attended by the angelic orders. Alleluia, Alleluia, Alleluia.”

The doors close behind the priest, and the golden veil is drawn across the glass of their upper portions. Altar and priest are hidden and invisible; now and again there comes a chanting voice from within, and the choir answers “Kyrie Eleison” to a second Litany.

The priest is praying secretly, and then with a loud voice he utters the words of Institution, which in the Latin Church are never audible to the people.

There are certain subjects which are too sacred to be discussed intimately and in detail in the columns of a daily paper; it must suffice to say that, according to orthodox Eastern doctrine, the Consecration is not effected by these Words of Institution, but by a formula which follows.

The Words of Institution effect what is known in the West as “The Sacrifice of the Mass,” and then, according to the teaching of the East, the Sacrifice is quickened by the Invocation of the Holy Spirit “upon us, and these proposed gifts.”

So the great and holy mysteries are accomplished on the altar behind the golden wall and the golden veil, under the Christ of the dome, who stretches out hands of blessing upon the people.

The symbolism is of heaven brought down to earth, of the priest standing a mortal amidst a host of the undying. The awful orders of the angels are about him, about him are the companies of the saints, around him stand the martyrs in dyed robes, having exchanged earthly anguish and the flames of burning torment for the eternal aureoles of heaven. With the prayers of the priest and of the people their prayers ascend to the place of the Majesty on high, and there is represented in a mystery the High Sacrifice of Calvary.

And I do not know that it is possible to find any better expression for the idea of this Eastern service than that of the old Wesleyan hymn:

Victim Divine, Thy grace we claim
While thus Thy precious death we show;
Once offered up a spotless Lamb.
In thy great temple here below,
Thou didst for all mankind atone,
And standest now before the throne.
… We need not now go up to heaven
To bring the long-sought Saviour down;
Thou art to all already given,
Thou dost e’en now Thy banquet crown;
To every faithful soul appear.
And show Thy real Presence here.

Previous: The War and Spring Poets

Next: The Book of Common Joys

10 thoughts on “The East in the West”