What in the world is meant by “Controlled Beer?” Oh, the evil which lies lurks within men’s hearts…

Arthur Machen clearly held good food and drink in high esteem as anyone can easily discover in dispatches such as A Question of Dinner and Let Us Keep the Tavern. However, through this oft-repeated motif, he is always concerned with a deeper reality. Here, Machen discerns not only a hieroglyph in the inebriating effects of a fine alcoholic beverage, but detects in its counterfeit an opposing symbol.

The New Beer:
My Pilgrimage Which Ended in a Small Bass
by
Arthur Machen
Evening News – April 13, 1916

I do not know that I am altogether sorry to have failed in the Quest of the Unholy Bottle!

It was reported that the Liquor Control Board, ever tireless in its efforts to promote the joys and pleasures of the lieges had invented a new beer. It was not like common beer. It did not cheer. It did not inebriate. It simply created a sensation of fulness.

Mr. Philip Snowden said that in a test case a workman had drunk twenty pint bottles of the Controlled Beer. “He was not in the least intoxicated, but felt rather full.” “Aussi bien boivent les bestes,” to quote Bacbuc, the priestess of the Holy Bottle. But I have not heard that any report of this man’s death from dilation has come to hand.

But this Controlled Beer, that tastes like beer, and smells like beer, and looks like beer, and is devoid of all the qualities that have made beer famous and good ale honourable; this was clearly a curiosity, and I went out to find it. I did not propose to drink twenty pint bottles of it. It struck me as probable that I should find a small part of a small bottle quite sufficient for my purposes.

I was informed that I should discover Controlled Beer at Enfield; at the Swan and Pike, and at the Ordinance Arms, and at the Greyhound. So I went to Enfield and asked which was the nearest of these hostelries.

“They’re all about four miles away. This is Enfield; those pubs are all at Enfield Lock.”

“I think the Swan and Pike’s in the Wash,” said another man.

A SEA OF CABBAGES.

So there were four Enfields, and the only clear thing was that I had come to the wrong one. Finally, it appeared that the Swan and Pike and the Ordinance Arms anyhow were at the Lock, and for the Lock I set out.

Now, in Shakespeare’s phrase, Enfield Town has no commodity with Enfield Lock. An uncharted sea of cabbages dissociates one from the other. There is really no particular way of getting from the town to the Lock. But I was advised to walk right through the town and take a train to Ponders End.

I took it – it started from a place that seemed at the back of everything – and therewith entered on an improbable region. I have no doubt the inhabitants fail to see the improbability; but the inhabitants of the Mountains of the Moon are, I daresay, convinced that they live in a most commonplace sort of country. There are in this region wastes of cabbages, thickets of plums and gooseberries, avenues of little red villas that stop dead in the middle of a field. There is a small shop that calls itself “Cosmopolitan Stores”–or some such title. It is still open. There is another shop that someone–he must have been a maniac–has planted all by itself, with a ploughed field in front of it, nothing on either side of it, and waste land behind it. This shop is closed. Then there are little rows of grey-brick houses that bear despair and the date 1861 upon them, and then more gooseberries. Then a stately Georgian house with its high garden walls and cedars; looking as strange as Goldsmith in his peach-bloom suit would look in the Fleet-street of to-day.

After this sort are the Wash and the Highway and Ponders End–it should be World’s End, of course–and it is also the end of the tramway. 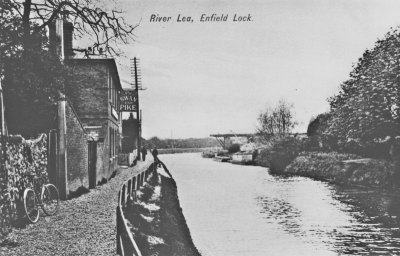 From Ponders End I take another tram that drops me in the middle of a road, “somewhere in somewhere”; I haven’t the least notion where it is. The conductor points to another road that, he says, leads to the Lock. This road turns into a path, which wanders at length by ploughlands and tomato houses, and a dubious stream and the backs of the premises to the desired place, Enfield Lock. I can only say that though I have been to Hetton-le-Hole and Tonypandy and Avignon, I have never seen anything quite like the Lock.

The Swan and Pike looked puzzled, and by their landlord told me that they had never heard of the new beer. 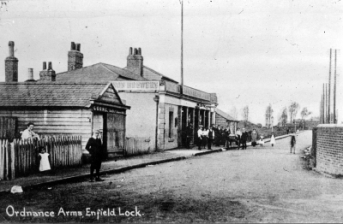 The Ordnance Arms, per potman, laughed and said:

The Ordinance Arms did not keep the Controlled Beer.

The Greyhound said that he did not keep it “at present.” And the Greyhound’s representative spoke as if she would not grieve if she never did keep it.

Meanwhile, the people of the Lock were drinking the common, wild, uncontrolled beer with a very hearty relish, which was pleasant to observe.

It is clear, I think, that the Quest of the Oracle of the Unholy Bottle is not for me.

Rabelais, of course, is a profoundly symbolical writer. I have long believed that his story of Le Dive Bouteille, the Holy Bottle, contains some of the deepest and the truest thoughts that have entered into the heart of man.

I believe also that the Unholy Bottle, which I did not find, has its deep symbolism. By very wine, man is made divine, said Bacbuc. What is one made by “Controlled Beer,” that is, by sham beer? I should think a liar, a humbug, a fool, and, finally, a Conscientious Objector.

Previous: God and the War

Next: Tanks As They Really Are