There exists a peculiar mania with which I am afflicted. Well, truth be told, my closest acquaintances could kindly imply that I possess more than one mania, yet, in public I will confess to only the following: I am a collector.

But do not weep for me, for I am quite content to bear the burden of this obsession. And, as with any addict worth his salt, I am quite skilled in the rationalization of said condition. For example, as an historian, I find inherent worth in an object of antiquarian vintage, for such an item speaks of the individual who was once its owner and for the society that produced it. Preserving and archiving rare specimens is valuable beyond the personal aims of the responsible collector. Furthermore, as a publisher, I am keen to track down a stray short story missing from the only extant collection of an obscure author. Rare editions often provide bridges over chasms formed in our knowledge due to a books languishing far too long out of print. When it comes to our favorite authors, unpublished letters may grant a glimpse into the meetings and events of a century ago.

Well, enough of my self-serving justifications. It is of the last example of unpublished letters with which this essay is concerned. 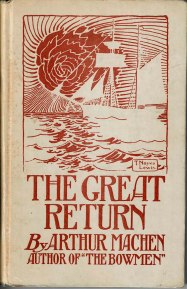 Earlier this year, I stumbled across a listing for a copy of The Great Return, the second impression of the first edition to be precise. This story has great significance for me, for though it is one of the most-overlooked narratives in the Arthur Machen canon, I believe it to be of core significance to understanding the work of its author… a mythopoeic map of secrets and wonders. However, I already owned a copy of this scarce title, and one which had survived in a better condition than this new offering. Yet… this one held an unexpected surprise for this specific edition… Machen’s signature. Indeed, this is a rare circumstance, and after considering the fair price, I purchased it.

Upon receiving the copy, I found in the front of the book on the blue end paper Machen’s signature in his fluid handwriting. Above, also in Machen’s hand, there appeared another name, one unfamiliar to me. Apparently, this book had been inscribed to a David Moss, the copy’s original owner. Of course, I was curious to learn more of the man, but I felt the name to be too common to conduct a successful search, and so, it soon fell out of my sieve-like skull.

Months later, I again stumbled upon a curious find. This time, a modest, but interesting cache of Machen letters hit the market. After reading the bookseller’s description, and being intrigued by the hints and glimpses of a treasure, I quickly made the decision to obtain the collection – unconcerned that the recipient of Machen’s missives failed to be a figure of importance. Machen is good enough. Soon, the trove had departed its former location to journey to the safe harbor of my study.

In a twist, so common in fiction that one would assume it never actually happened to living people, I awoke in the night watches with a flash of clarity. David Moss. “Curiouser and curiouser,” as one adventurous little girl once said. Arising that morning, I repented of my harsh dismissal of Mr. Moss, and with a strong cup of coffee, determined to strike upon a cold and overgrown trail of discovery.

Our elusive figure married Frances Steloff, the owner and proprietor of the Gotham Book Mart, a landmark bookshop and literary salon in New York City. From its opening in 1920 to its closure in 2006, the store functioned as a haunt for major writers such as W. H. Auden and J. D. Salinger. Moss is credited with the name of the business as well as its logo: “Wise men fish here.” The couple were divorced in 1930, at which point, Moss drifts into deeper obscurity. However, this was enough to convince me that he, along with more famous names such as critic Vincent Starrett and poet Robert Hillyer, formed that slice of the American intelligentsia and literati responsible for the Machen Boom of the 1920s.

Among other material, the cache contained two letters from Machen to David Moss, written roughly six months apart. I offer the first in full:

Many thanks for your letter.
I will call on you tomorrow at the Regent Palace Hotel, at about
11 a. m., unless I hear to the contrary.

I remain
yours sincerely,
Arthur Machen 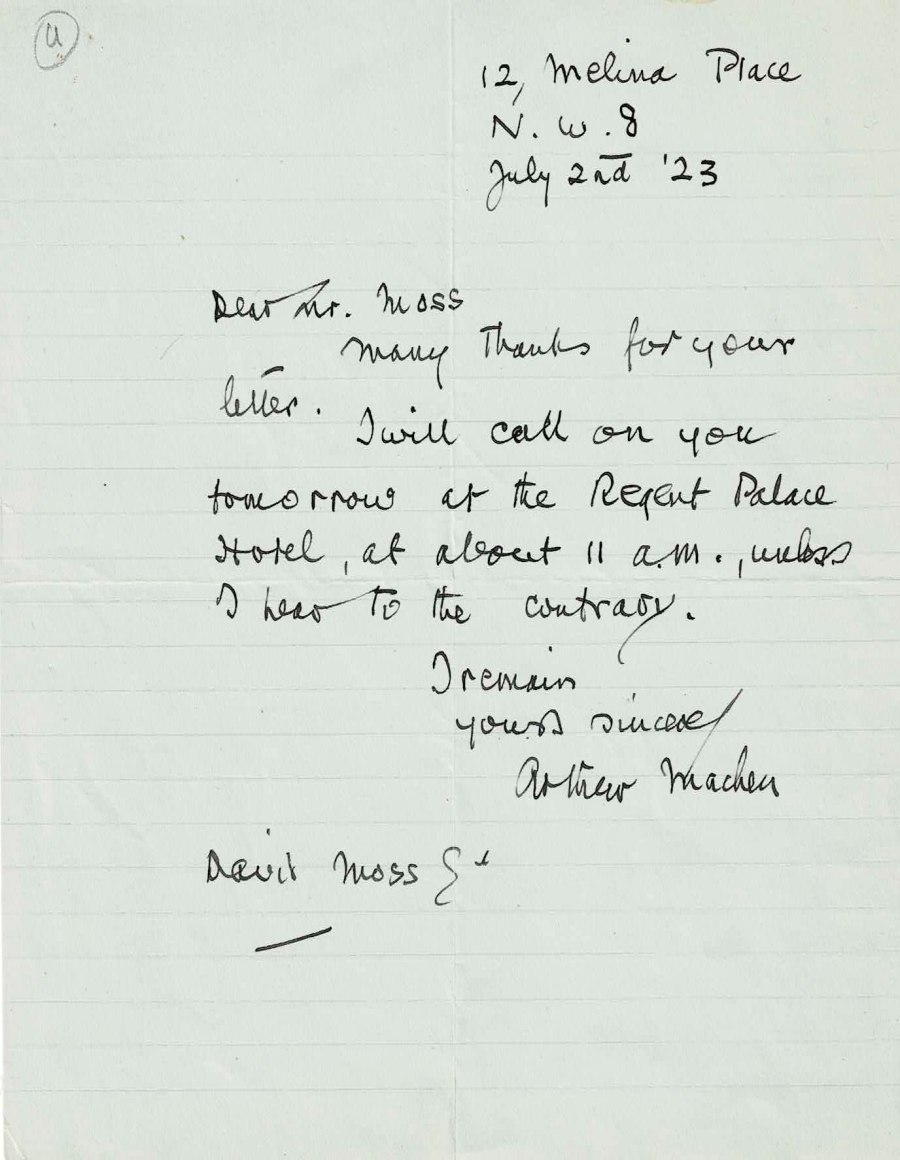 Included is the original envelope, but more importantly, we find a set of four sheets of Regent Palace Hotel stationary bearing a scratchier script by Machen. The text describes an itinerary, a set of directions to explore London and the rural countryside of Gwent: “…on your right you will see the mountains of the Hill of Dreams / at the southern end see tumulus, “Twyn y Barlwm…”

One can easily imagine Machen signing and inscribing a copy of The Great Return, and perhaps other books, on that long-distant morning of July 3, 1923.

The second letter is dated January 15, 1924 and it is accompanied by an envelope addressed to the Gotham Book Mart. Here, Machen thanks Moss for sending him a book by H. L. Mencken. He writes: “I have always taken a great interest in the American idiom, & Mencken has solved most of my riddles for me. I note especially the derivation of “phoney”: it is almost equivalent to our Brummagem…” Additionally, Machen wishes the best for Moss in a personal quest: “I hope you will get your $150 for the Introduction ms. The higher these prices are the better it is for me in the long run.” Machen is referring to his introduction to the 1923 reprint of his early book, The Chronicle of Clemendy.

What was the result? I wonder where that manuscript resides today.

One could question the rationality of selling and buying such material. Was it reasonable to do so? In visiting London that previous summer, full of delights and distractions, why did Moss set aside time and energy to meet this obscure figure? To sign books? Where is the utility in such an act?

I would suggest the Moss collected such material for the same reason that he took a train from Paddington to Newport. And again, “…from Caerleon go to Usk, from Usk to Abergavenny, hence back to Newport by Pontypool Road station…” He sought wonder and mystery.

In the end, I suppose that can be the only justification for indulging in the mania of a collector, to find and preserve wonderful things… to discover puzzles in fragments – ornaments in jade – and knowing the secrets are to be found in the mystical whole.

These and other letters will be on display in Wichita, Kansas during the Inklings Festival held October 22-24, 2021. On Sunday afternoon, there be a discussion on rare Machen ephemera and the value of such material to the literary explorer. Letters between Machen and Dorothy L. Sayers will be examined alongside documents describing Machen’s role as an advance reader for The War in Heaven, the first novel by Charles Williams.

Register at the Eighth Day Institute.

3 thoughts on “Yours Sincerely, Arthur Machen”