The following piece is among the shortest articles by Arthur Machen to be posted to date. Yet, it would be a mistake to pass over it, for its brevity does not signify a lack of substance. There are a few loyal readers of this column who enjoy Machen’s reading choices, and many of these books are enticing despite, or perhaps because of their obscurity.

At the end, I have added a second excerpt from the paper which fell directly below the conclusion of Machen’s article. It has nothing to do with our writer or books, but it is… well… it is quite curious.

Political and Literary Essays. By the Earl of Cromer. (Macmillan)

“A mere word,” says the Earl of Cromer in one of these Essays, “as in the case of Edgar Poe’s ‘Nevermore,’ has at times inspired a poet.” Well, in all probability, the rule is a true one , but there are doubts as to the validity of the instance. Poe, no doubt, explains the writing of “The Raven” in these terms; in a most delightful essay he shows how that ingenious but over-esteemed piece of artifice was built by a series of logical and necessary steps on the foundation of the pathetic word, “Nevermore.” But when Poe was writing an essay he did not consider himself as being under a judicial oath to tell the whole truth and nothing but the truth. There is every reason to suppose that “The Raven” was born, not of the word “Nevermore,” but of some lines by Albert Pike, a forgotten versifier. “Isadore” was the title of Pike’s “poem,” and one verse ran as follows:—

Lord Cromer’s “Disraeli” Essay is striking. Disraeli, he says, was a political adventurer, but an adventurer of great ideas. But neither Lord Cromer, nor anyone else, seems to put the great question: Why did not Disraeli undertake in the day of his power that great social campaign which he had seen to be of the first importance forty years before 1874?

The Case for Co-Education. By Cecil Grant, M. A., and Norman Hodgson, B. A. (Grant Richards)

Co-education is a novel term signifying a novel practice: the education of boys and girls under the same roof. The authors declare that the adoption of this system here will tend “to combine the vigour and manliness of the English Public School with the softer virtues and purer atmosphere which American women and girls bring to the American; to join virility to gentleness, to strengthen without spoiling the tender graces of womanhood, and to unite freedom with a spirit of discipline.” Messrs. Grant and Hodgson are, clearly, optimists.

“For God’s sake learn Italian as fast as you can, to read Ariosto.” So Charles James Fox wrote to a friend, and Professor Nicholson heartily echoes his counsel. But in the meantime he here retells the old, wonderful tales in good, straightforward English, that his version may excite us to the study of the original in that musical Italian that we have so shamefully neglected for the last eighty years in favour of “crabbed, yet glorious Deutsch,” as a character in “Jane Eyre” calls German. And, even in their plain English dress these stories from Ariosto come to us all golden, magical, with the ring and summons of authentic incantation sounding through them. To read “Tales from Ariosto” after a good deal of modern stuff in fiction is to pass from the asphalt courtyard of the Model Dwellings to the old enchanted forests; to breathe the winds of perilous faery seas in place of the stifling city air. Who will not desire to continue a tale that begins thus:— “Now it chanced after Orlando, in his black armour, had routed the forces of the two pagan kings with great slaughter, he came at nightfall to a hill, and from a cleft in the side there streamed out a gleam of light”? 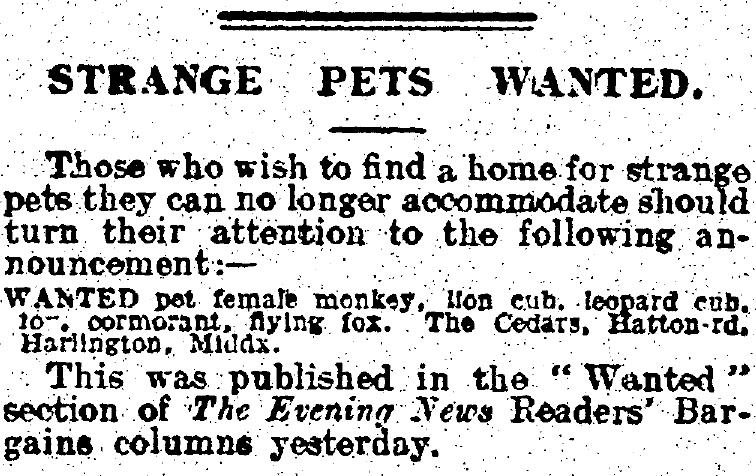 Previous: What Pays in Coventry

3 thoughts on “My Book Shelf”