Between 1908 and 1910, Arthur Machen served as a regular contributor to T. P.’s Weekly, a magazine of literature and culture founded by journalist and politician Thomas Power O’Conner. During his tenure, Machen provided the journal with the same high quality of criticism that he had previously published in the pages of the Academy. Though some of these excellent pieces were later collected in Notes and Queries (1926), a rare volume today, most of the articles have remained inaccessible since their original appearances in the magazine.

Below we offer an example from Mist and Mystery, the new book by Darkly Bright Press, conceived to collect some of this stray work.

The precise distinction between mist, recalling man’s loss of paradise, and mystery, the pursuit and recovery of it, is not a trivial matter in Machen’s work. In fact, these themes and the contrasting results serve as the great concern throughout his fictional narratives. The Great God Pan, a harrowing parable illustrating the dissolution of personhood, finds its overturning in The Great Return, a tale of fallen man and creation transfigured. This contrapuntal relationship between noetic horror and holy dread distinguishes Machen in the crowded field of the speculative fiction of his time.

In other words, here there be dragons and dragon-slaying.

Some of the many dragons we encounter in the new volume are the sham religious sects which swirled like yellow fog about gaslit streets of Machen’s London. While it is true that Machen briefly participated in some occult circles in the early twentieth century, there has remained a tendency to both hyperbolize and romanticize the extent to which this represents Machen’s worldview. This caricature disappears as Machen’s beliefs, clearly and consistently expressed as a critic and essayist, are examined.

For example, Machen routinely disparaged spiritualists as naïve at best or frauds at worst, while never dismissing the danger of their activities. While subtly questioning R. H. Benson’s conclusions as to the agency behind spiritualistic manifestations, he nonetheless agrees with the novelist in principle. Here, he delivers one of his strongest denunciations in print:

“I should think that the author has mingled a good deal in the circles which hover about the foolish and forbidden and dangerous thing called ‘occult science.’”

And, who is this author?

Robert Hugh Benson was the the youngest son of E. W. Benson, one-time Archbishop of Canterbury. Alongside his older brothers A. C. and E. F. Benson, Robert wrote fiction, but unlike these two, he joined the priesthood. After the death of his father, Robert caused some controversy by converting to Rome and eventually attained the rank of monsignor before his death at age 44. He wrote prolifically in many genres including historical fiction, Catholic apologetics and supernatural stories. On the topic of spiritualism, Benson penned a fine essay: Farrago of Fraud and Fancy. 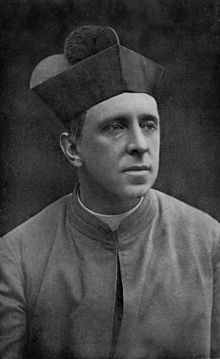 There are several ways in which it is possible to approach spiritualism, or spiritism. Most of us, I fancy, not being spiritualists, are content to set down the whole matter as a compound of fraud and delusion. Spirit-hands, we say, are the hands of Sludge the medium, or else they are inflated gloves at the end of a long stick. The raps are produced by a clever trick, possibly by the medium’s finger-joints, possibly by his knee-joints, possibly by his toe-joints. The writing on the locked slate is mere legerdemain, helped out by the conjurer’s “patter”; the “materialised spirit-forms” are Mr. Medium or Mrs. Medium dressed up in all sorts of odd disguises, in muslin draperies, or priest’s vestments or nun’s robes. When strange tones are heard, it is ventriloquism, not a voice from the “other side.” Perhaps some of us may go so far as to admit telepathy and the subliminal self as possible agencies in certain spiritualistic marvels; for the rest, we say that it is all theatrical and Maskelyne and Devant. Then there is the view of the spiritualists themselves—the belief that the genuine phenomena are the work of the spirits of the departed. And then there is the view taken by Father Benson in his curious and fascinating novel, “The Necromancers” (Hutchinson. 6s.).

Father Benson’s hypothesis is, it would appear, that there are in the universe forces—personalities—of hideous evil, whose delight is in the ruin of humanity—in body, soul, and spirit. These demons—to give them their just name—can be evoked, he thinks, by the spiritualistic process, in some instances at all events, and those who assist in the incantation are in the gravest peril. For the “unclean spirit” delights, as we have seen, to make its habitation amongst the sons of men, and if there be in the circle any of those persons called “sensitives,” or “psychics”— to use the deplorable phraseology of the séance—the evil spirit will take possession of them, or at least endeavour to do so. The result may vary with the personality attacked; the devil may manifest as “nervous breakdown,” or neurasthenia, or madness, or dipsomania, or general and total moral collapse. This is the hypothesis as to spiritualism which is skilfully and impressively worked out in “The Necromancers”; and, whether the theory of causation be right or wrong, I do not think that there can be any doubt as to the soundness of Father Benson’s analysis of the effects. We may have our own opinions as to the nature of electricity, but we are all agreed that it is dangerous to play with dynamos and live wires.

I should think that the author has mingled a good deal in the circles which hover about the foolish and forbidden and dangerous thing called “occult science.” Here is a portrait of a lady which seems life-like:

She was busy with various very beautiful little emblems—a scarab, a snake swallowing its tail, and so forth—all exquisitely made, and hung upon a slender chain of some green enamel-like material. Certainly she was true to type. As the full light fell upon her it became plain that this other-worldly soul did not disdain to use certain toilet requisites upon her face; and a curious Eastern odour exhaled from her dress.

Fortunately Maggie had a very deep sense of humour, and she hardly resented all this at all, nor even the tactful hints dropped from time to time … to the effect that Christianity was, of course, played out, and that a Higher Light had dawned … it appeared that the lady did not go to church, yet that, such was her broadmindedness, she did not at all object to do so. It was all one, it seemed, in the Deeper Unity. Nothing particular was true: but all was very suggestive

and significant and symbolical of something else to which Mrs. Stapleton and a few friends had the key. Mrs. Baxter made more than one attempt to get back to more mundane subjects, but it was useless. When even the weather serves as a symbol, the plain man is done for. … It seemed that the psychical atmosphere of most modern houses was of a yellow tint, but that this one emanated … a brown-gold radiance which was very peculiar and exceptional.

The lady described had enjoyed the advantage of a quiet chat with Cardinal Newman a few weeks before her appearance at the country house. It is pleasing to understand that the Cardinal has become broad-minded on the “golden shore,” though he has no objection to bestowing the orthodox benediction on those who desire it. Indeed, it is reported—though Father Benson does not mention this—that the Cardinal once announced his appearance to the séance by uttering the solemn word “Benedictine’’!

It is with these elements, and with others, not foolish, but terrible, that the author has compounded his story. The medium Vincent is, I think, a wonderful figure. Vincent is no Sludge, no clever charlatan. He believes thoroughly in spiritualism, he acknowledges the risks that are incurred, he thinks that spiritual disaster must be faced by the spiritualist just as physical disaster has to be faced by the Alpine climber or the Arctic explorer—and he really possesses certain “occult” powers. Vincent is, in fact, a powerful ally of the besieging evil principle, but he does not know it; and when the Shining Form appears in the likeness of the dead Amy he is convinced that the girl’s spirit has “materialised.” So the hero of the tale falls into Vincent’s hands, with the most awful peril—almost into destruction of body and soul. The scene of the final struggle of the lad’s rescue, is admirably described. It is doubtful, I think, whether Father Benson’s spiritualistic theory is the true one. It may be suggested that the Force evoked in the genuine séance is rather impersonal than personal, rather psychic than spiritual. But “The Necromancers” is most decidedly a book to read.

One thought on “Trying the Spirits”